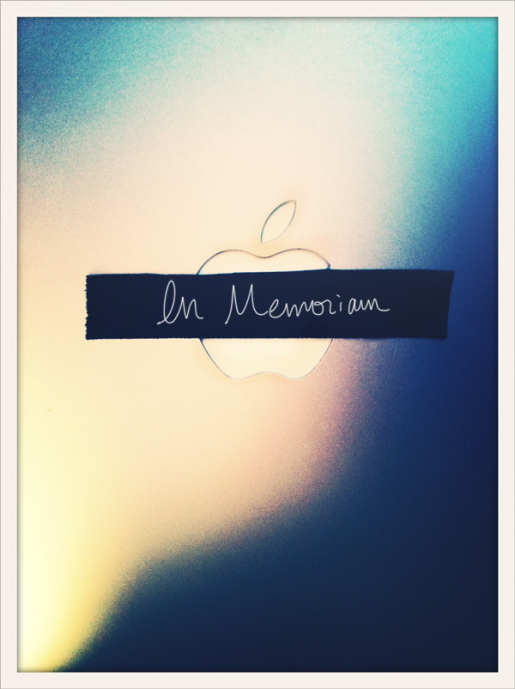 The first computer I ever used was an 80’s era Apple Macintosh Plus. I was six years old. When my Dad brought it home from his job at Control Data, I didn’t even know what a computer was. That day he picked my sister & I up from school and we talked about what makes a computer a computer in the back seat of his clunky Plymouth Horizon. “What’s a mouse?” I remember asking. Does it have a tail like a REAL mouse? In hindsight, naming such an important tool after a small furry woodland creature is a classic example of how user-friendly Apple has always been. I remember thinking this thing can’t be that intimidating if it’s named after a mouse.

I wrote papers on the Macintosh though high school. Sure it was as clunky as my Dad’s cars, but that thing trucked along for almost ten years. I went to college with one of Apple’s first laptops, a PowerBook 1400cs, a hand-me-down also courtesy of the Dad. It was a tank, so heavy it barely qualified as portable, and yielded maybe only a half an hour of battery life. I logged many hours of Snood on it before deciding that if I wanted to be a real designer I needed to upgrade. OSX was released shortly afterwards and the rest, as they say, is history.

But really there’s no better example of Apple’s spirit than their response to earthquake & tsunami in Japan earlier this year. In an act handed down straight from the higher-ups, the stores were kept open long after business hours, offering victims refuge and a place to make contact with their loved ones. They provided free food, clean water, shelter, and transport to staff and many customers for days after the disaster struck. I took that in with tears in my eyes, amazed at their sheer selflessness, acts almost unheard of for a large corporations today. Acts that would not have happened without Steve Jobs.

I’m holding all my Apple products a little tighter today as I think about Steve’s astonishing influence. Thank you for giving so many people a new way of seeing the world. That is a huge gift and I feel lucky to have it. I’m so sorry cancer dealt you its worst and I’m donating to the American Cancer Society in your name.

I’m hugging my Mac tighter today. p.s. My dad worked at Control Data in the 80s too. Weird…how did we never know that?

Waaaa?! That is NUTS! I wonder if they knew each other then….

Even when not on a large public level, Steve and his company are brilliantly poetic in their commitment to actually caring about people, aside from the bottom line. When my best friend, and Apple employee at the time passed away in an untimely bicycling accident, Apple not only gave anyone in the store time off but actually rented a large 150 passenger bus for coworkers to take the trip more than 400 miles each way to his memorial service and didn’t charge them a cent. Till this day I still say “I used to work at Apple” with more pride then almost anything else I can think of. Much respect to Mr. Jobs and all his glory. And, of course, for Pixar and Toy Story and junk.

What a great post. I love how you wrote something personal about your experience with thanks to Steve. Thanks for sharing.