Gush, gush, gush, awesome unicorns and sprinkles, gushing inspiration overload, tasty beer, hot dogs, gush. My brain is a mush of gush. I expected to have a blast of course, but I didn’t expect to be absolved of all my design angst and stress about what I do. I lost all of that and the desire to make took its place, which is priceless. Too bad we can’t go to these things all the time so this feeling never has to wear off! If you go to no other design festivals next year, make it WMC Fest. Come as you are learning & inspiration is the best kind if you ask me. Plus I can’t emphasize the cheap factor enough, best bang for your buck in living memory. 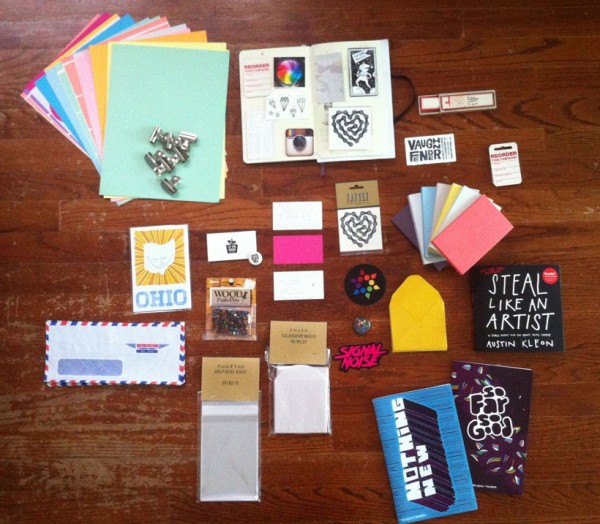 + Gear, cards, and many Tattlys from the likes Jennifer Daniel, James White, Vaughn Fender, Joseph Hughes, To The Moon Studios, and Tuesday Bassen. Somehow I missed out on the festivale goody bag though, whoops. I did pick up the ticket for it, but I promptly lost it and got distracted by awesomeness at every turn so I never remembered to go back. Ditto for the photo booth too.

+ If you live in the Kent area you have to go to Hollo’s Papercraft. Man, what I wouldn’t give to have a place like this closer to Chicago. Aisles upon aisles of delicious papers, materials, party gear, art supplies at super duper prices. Same goes for Cleveland’s thrifting, I hear it’s some of the finest. We did stop at the used office supply shop on Detroit Avenue near the festival & found a few goodies. That’s where I found the wooden pushpins for $1!

+ Great talks over all, but there were a couple of designers who gave real estate tours of their work. I guess it bears repeating once again, you shouldn’t only show your portfolio when giving a talk. I know how to use google dudes, I can look your work up if I want to. Doing this is a lot like a looking at slides from someone else’s vacation; it’s boring after 10 minutes. Interspersing fart jokes between slides is cute at first, but it’s a crutch and doesn’t add any depth. Up your game. Plus, winging it up there is insulting to the speakers like me who lost more than a little sleep and a few tears while putting our talks together. Bravado is crap on stage. Bring the real, please.

+ I was sad that so many people left early! I know, I know extenuating circumstances blah-de-blah, they do happen. But unless you’re Austin Kleon with a pre-scheduled cross-country book tour or a similar airtight alibi I find it hard to buy other reasons for leaving early. Trekking all the way there only to miss out on learning is like cutting school at recess. Kate Bingaman-Burt’s final keynote brought the house down with a full standing ovation, I wouldn’t have missed that if you paid me. And in fact, I lost billable hours because this meant I had to take Monday off as well, but don’t care, worth it. This holds especially true for speakers & the designers who were displaying work. If you got a free pass to the conference or an honorarium for attending, you better bend over backward to attend everything you can.

+ Cleveland streetwear brand iLTHY blogged some of the street style from the fest, look how we love polka dots!

+ Jen Myers‘ talk on women developers was enlightening. Especially because it stirred quite the rumor mill, which is sign she gave a great talk. Engaging rumors online is a messy business, and generally not worth addressing, but in short, a few bros said her talk was nonsense and women don’t face discrimination when it comes to design or development. OH HA HA HA. HA. HA. Are we still here discussing this? Really? It’s actually probably better that I didn’t hear these things in person because I would not have been able to resist sticking my neck out. I wonder if this was stated in male-only company too. Pfffft. If you can’t or don’t say your opinion in front of the people you’re knocking it means you’re not giving us the chance to refute, and that right there is active discrimination. Congrats on proving that this inequity exists one more time.

+ Other people I got to hang out with who didn’t speak: Veronica & Beth Corzo-Duchardt, Jacqui Oakley & Poly Studio, Caroline Sewell, Jessi Arrington, Jason James, Troy DeShano, Mikey Burton, Fringe Focus, Max Temkin, Nick D, Jana Kinsman, Elaine Chernov, Mig Reyes & Kik McNally and all the rest of amazing Chicago designers who came and offered their support. It gave me much courage seeing so many friends in the audience while I was talking.

+ Finally a HUGE, huge thank you to Joseph Hughes & Jeff Finley for organizing this and giving me the chance to take the stage. You obviously know how to throw it down. It’s no small thing to create so much community motivation. You are the very heart of Cleveland.

+ Now for the trickier next step: recapping my actual talk. I said some important things and I want to make sure that even the people who went get a chance to take it in. Stay tuned!! It’s in the works, hopefully with video.

Awesome little recap Margot! It’s a pleasure to hear your perspective. I missed half the talks, which I am really hoping to see on video very soon! Kate’s talk was amazing though, and I caught the tail end of yours. You rocked it from what I heard!

Hopefully you’ll come back next year!

Oh, Jeff! I can’t thank you enough! I really hope I can come back next year too! That would be so rad.

FINALLY got a chance to read this 🙂 Awesome re-cap and great meeting you! You’re talk was super and one of the most memorable for me. Also, I found out that we some mutual friends, Julia Haw and Sarah Jane, we should all get some booze together 🙂

Oh, that’s so awesome Marina! Would love to hang out with you ladies. What a delightfully small world this is, thanks for introducing yourself! Hope to see you soon!